I was at home for two nights, but it didn’t feel like I was really there. I was in a liminal space, neither on trail nor truly at home. My dad picked me up in Monroe after I hitchhiked down from Stevens Pass and we drove down the back roads to get home, as my dad is often inclined to do. He filled me in on everything that was going on back home and asked about life on the trail, excited to hear about my experiences. I found it difficult to explain what my life had been like for the last two weeks. I had felt like I had come through hell in Glacier Peak wilderness, but I couldn’t explain how that had felt. All I could talk about were the good things that had happened, because that’s all I cared about anymore. It was disorienting travelling familiar roads and listening to the same problems that had existed before I left. Everything felt different for me though.
I got home and my mom welcomed me with a fridge full of food, but I don’t think she fully realized before I arrived how voracious my appetite would be. She would spend most of the next day around me and bore witness to the fact that I never stopped eating. Before I ate anything though I stood half naked in the bathroom with her while I weighed myself. She did the math for me – I had lost 17 pounds in less than two weeks.

The next day happened to be the fourth of July, but for me it was REI day. My whole family ended up coming and it was a fun adventure, we are not a “going to the mall” type family but to get me a new pair of shoes and spend some time together it was worth it. The day before had been my sister’s birthday and I was so excited to be able to celebrate with her. The whole day felt surreal, I knew that I wasn’t really home. The city was noisy and chaotic and smelly. I just wanted to be on trail, and that was how I knew my hazy, fever dreams about quitting had just been passing fancy back in Glacier Peak Wilderness.

The next day my grandparents volunteered to give me a ride back to the trail, or most of the way anyhow. I wanted to go first to the Dinsmore’s, a hiker hostel in Baring, Washington famous to PCT hikers, you have to stay at the Dinsmore’s off of Highway 2. They dropped me off there and said goodbye for now. The world snapped back into focus the moment their car pulled out of sight, and I realized that something important had shifted in my thru hike.

The Dinsmore’s have been operating a hiker hostel out of their home for over 15 years. The hostel consists of a bathroom and laundry facility, and a bunkhouse in half of their Shop, decorated with memorabilia hikers have left behind over the years. This includes one of the 26 wedding dresses a guy hiked the whole trail in, a different dress for every section. It is suspended from the ceiling like a ghost, and the common consensus among hikers is that it’s creepy as hell.

Jerry Dinsmore used to run the place with his wife, but after her passing before the 2018 hiking season, he has been largely on his own. Many hikers worried the place may not continue to function, particularly after Jerry suffered a stroke early on this year. However I was excited and pleased to find they were indeed taking in tired hikers, and I met up with some friends there I hadn’t seen since we parted ways at Stehekin. I also met Claudia, she is the woman who has been helping Jerry out. I ended up staying longer at the Dinsmore’s than I expected to, I tried to hike out after only a night and found I was having some foot pain. I decided to stay one day longer to let it rest and hopefully prevent any further damage. I hitched a ride down from the pass after a false start on trail. I had been standing on the highway for 2 0 minutes waiting for a someone to stop when a cop car rolled up. I thought he was going to tell me I couldn’t hitch hike there, but he just offered me a ride – my first ever ride in a cop car!

It turned out to be a good decision to go back to Baring for another night. Claudia gives incredible foot massages, she may have actually saved me life. We spent a long time talking about her plans to move to Ecuador and our common frustrations with society. I left the Dinsmore’s promising to come back and visit after I finished the trail. I look forward to it, you never know when you will make meaningful soul connections, but I was glad the opportunity arose.

After three full days off trail I was eager to get going again. I hiked out with Inventor and Goldy, I had met Inventor way back in Mazama and Goldy at the shelter outside of Stehekin. His mood had vastly improved since then, we hadn’t suffered through any more thunderstorms since then, and his memorable quote, “This is not what I signed up for,” didn’t seem to apply anymore. We were still having more cloudy days than sunny, but the weather definitely turned on that section, the nights were warmer and we, finally got a little sun.

Inventor on the other hand was feeling a little moody. He and I talked a lot about “Trail Families.” Traditionally trail families are groups of people who hike all or most of the trail together, spontaneously formed but bound fast by the shared experience. Hiking SOBO is a little bit different, there are fewer people on trail, more widely spaced and it’s more difficult to stay with the same group. Inventor had tried to hike out alone a couple days earlier, but after getting lost in a snow field and banging up his legs pretty bad he decided to turn around. He, like I had, realized that there was something important about hiking with other people. You get too deep in your thoughts sometimes, and it’s helpful to have others around who may also be struggling with the same things you are. And I had been struggling. It helped to know he was too, that it was okay to want to be around people.

We hiked 17 miles up out of Stevens pass, bound for Snoqualmie. My feet weren’t hurting quite so bad, the new shoes seemed to be doing their job, although at the end of every day they were very tired. The terrain was rough throughout the section, lots of rocky talus slopes and slippery shale where the rocks moved under your feet and your ankles twisted on every step.

I was rolling with Gasket as my trail name, it seemed to be working fine. Until someone mistook it for “Casket” and I reconsidered, reverting to Erika. At some point Inventor suggested “Snot Rocket,” for obvious reasons. I wasn’t too sure, “Can I really just introduce myself as Snot Rocket? I mean how does that sound?”

Inventor and I talked a lot on that section, I was sort of his therapist for a while, and he mine. He was processing the changes in his life since he had done a thru hike of the Appalachian Trail 30 years previously. And I was processing the changes in my life since high school, the direction I wanted my life to go, the problems I had forming meaningful relationships, both on trail and off trail.

At one point the three of us had stopped for a rest and, in the midst of conversation I said, “I don’t know I’m just bad at people.” “What do you mean you’re bad at people?” Goldy was baffled and I looked at Inventor, hoping maybe he knew what I was talking about. He nodded and said, “I know what you mean, I’m a bit of a loner too.” I forgot that there was a word for that, or that other people have that problem too.

I told him later – “We all come out here to put a stop to everything and get a hard reset. You’ve got to hike the trail for your own reasons. That’s what Watercolor told me, you can’t do it for anyone else, it’s got to be for you. There’s no rules about how you hike the PCT, do it your way.” That seemed to make some sense to him, and alieved some of his own internal struggle. For my part, I couldn’t for the life of me think of who I would put myself through this for, so I guessed I had to be hiking for myself.

Inventor told me, “I wanted to come out here so I could know if I could still be happy when things are shitty.” I knew what he meant. 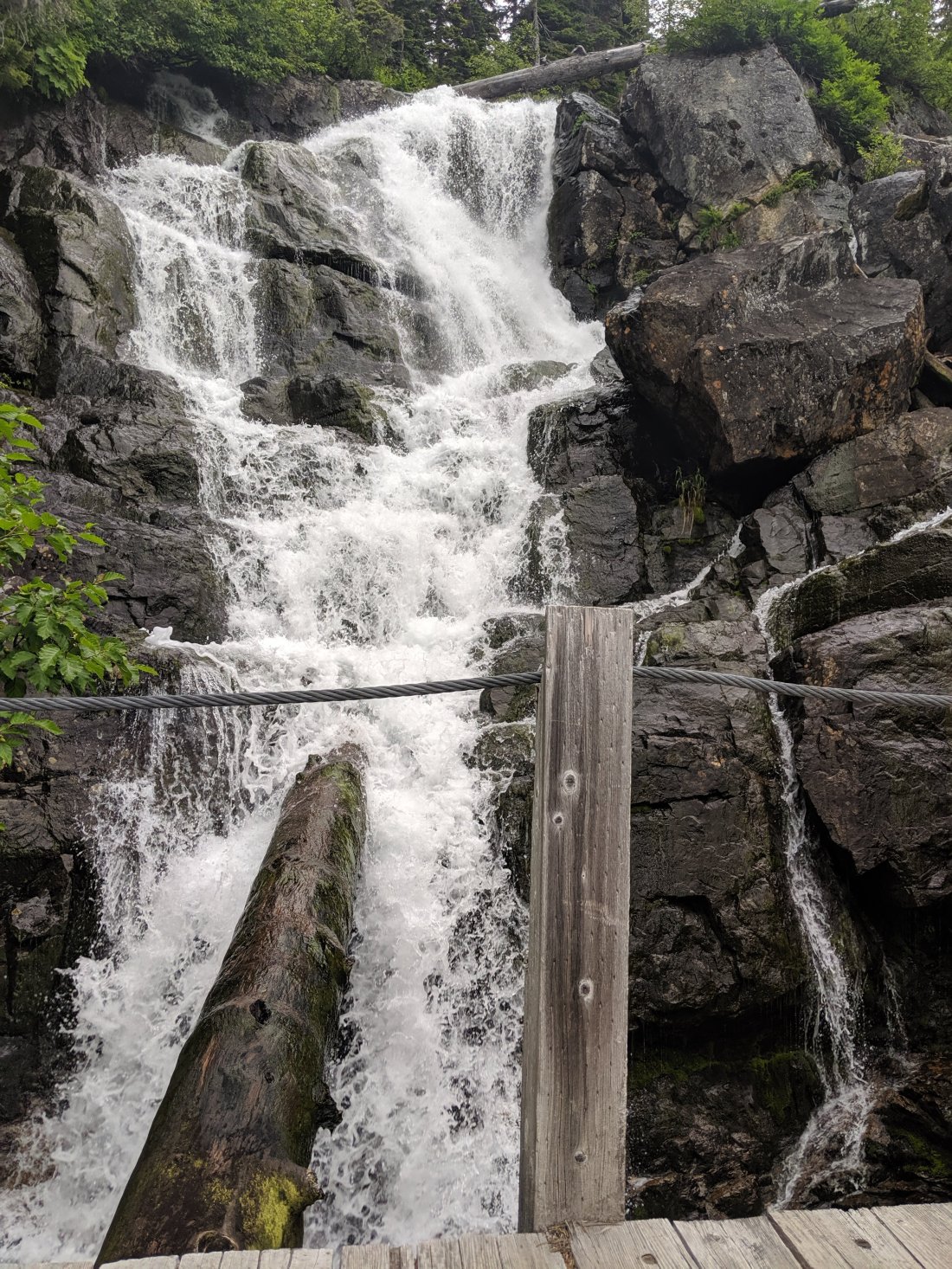 We had a good camaraderie, Goldy, Inventor, and I. We joked about different people we knew and imitated the marmots shrieking in the hills. We enjoyed the views and complained about how torn up our feet were and got excited about getting to town.

We had one day of sun then it started raining on us again. It was okay though, we had all suffered more at this point, and we were closer every day to town and a hot shower. 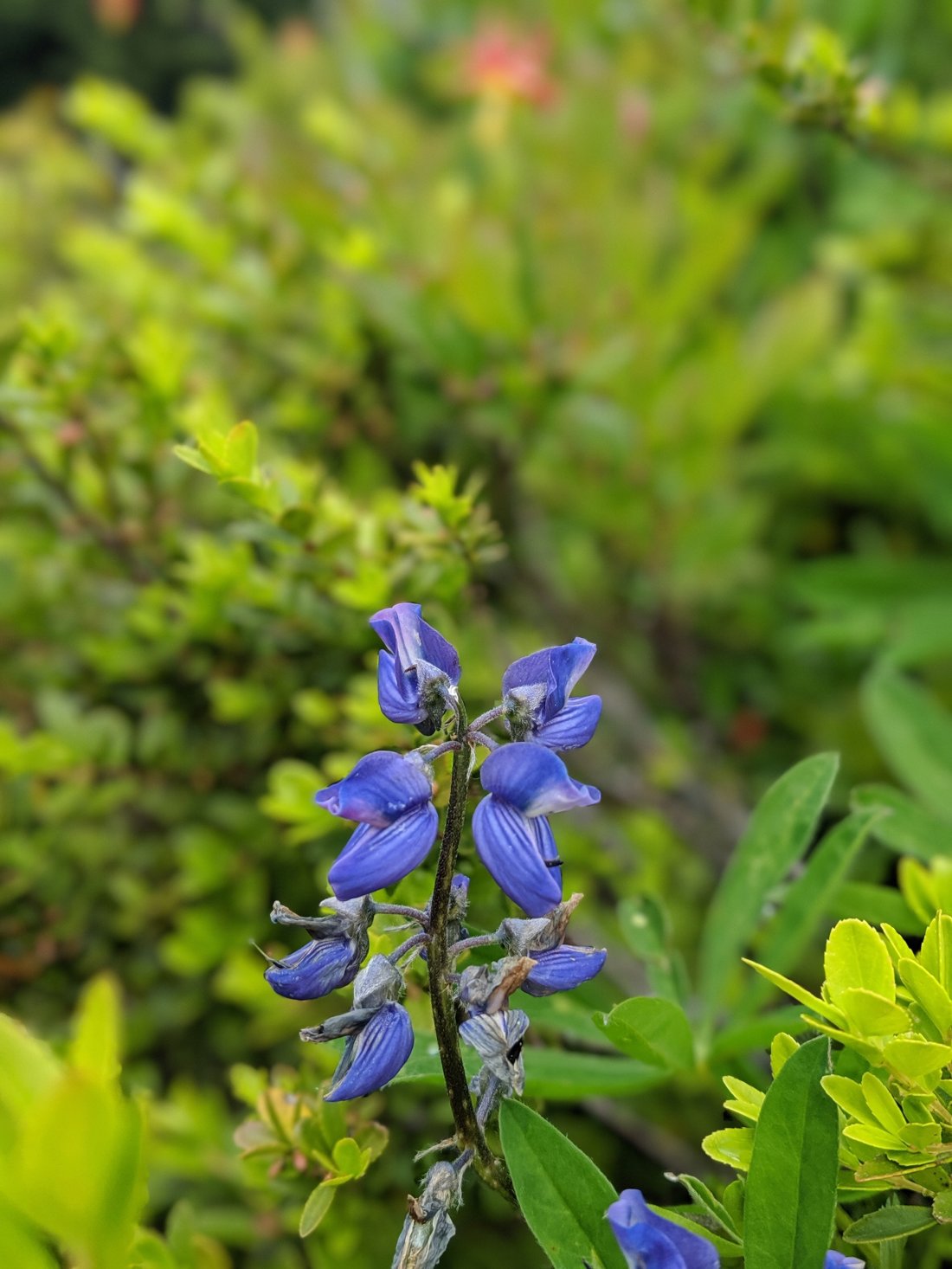 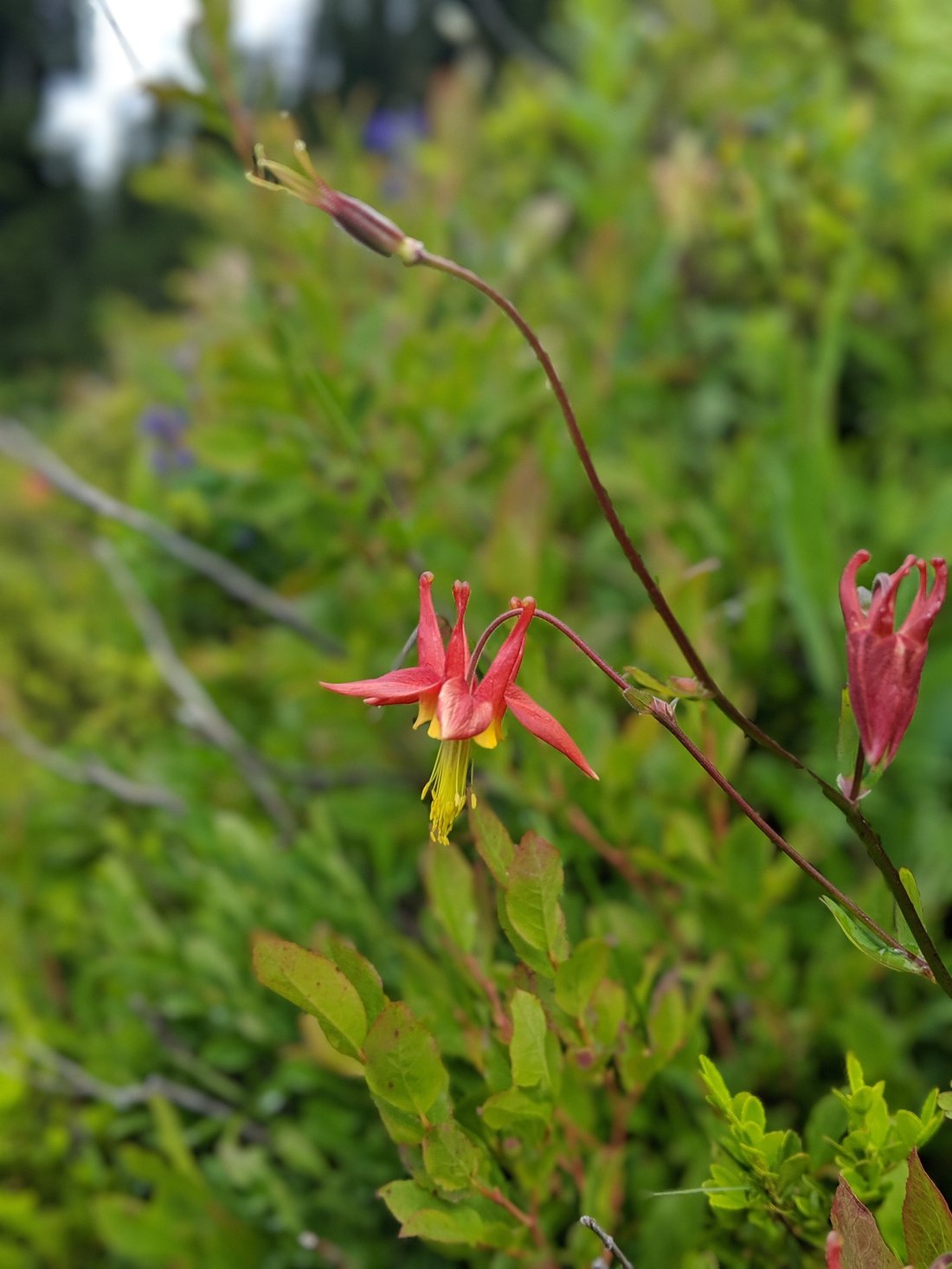 We only hiked a 16 mile day into Snoqualmie Pass, and I was greeted with a free beer and a gorgeous vegan curry. I got a hotel that night with Goldy and Inventor, it was still $40 split three ways which felt like a fortune when you’re living a transient lifestyle. We ran into some other friends there but I quickly realized I was going to be hiking out on my own the next day, Goldy and Inventor were both leaving the trail for a short time, for their own reasons. I felt discouraged, after coming to terms with the fact that I didn’t necessarily want to do the whole trail alone now I would be again, not by choice this time.

I was sitting in the hallway of the hotel outside the laundry room, wearing a pair of holey jeans and a worn out rain jacket that was about three sizes too big I had found in the hiker box. A girl named Ratz who was hiking north came by and we sat in the hall together, talking for some time about her experience in the Sierra’s. It was a moment of serendipity where she saw me and I saw her, although we will likely never cross paths again. She had flipped up after they realized the High Sierra’s were too dangerous this year, she shared some moments where genuinely feared that the group she was with may have slid off the mountain after they got caught in a blizzard. I told her about some of my struggles trying to connect with people, but not hang on too tightly. She gave me some coping strategies for how to be alone on trail. And how to not be alone.

“Sometimes emotions are like having a bird in a box. Like if you have it in the box you can kind of look at it and show people, but you’ve still got it right there. If you’ve got the bird on a string though and it’s like,” she gesticulated wildly in the air in front of her, “you’re kind of screwed.”

I enjoyed hiking with “my boys.” But I knew I would have more time to think on the next section, and maybe that’s what I needed to do what I came out here to do. To put my bird in a box.

View all posts by Erika Rae