Fire Creek pass the next morning was a similar story, 2,887 feet of gain in one long push. The three of us encountered some sketchy snow crossings but we played it safe. Plugging Along kept sending me ahead to blaze the trail for him, though the footsteps of the hikers who had already ascended were easy to follow.

We arrived at the top and yelled our victory into the wind, admiring our first full 360 view from 6,600 feet. Across the valley you could see all the switchbacks we had come down the day before, far far away. I turned back to watch Watercolor coming up behind us where she slipped coming off a snowy section and skidded down a short, gravel slope, my heart dropped for a moment but she recovered, shouting up to me that she was okay.

We dropped down to Fire Creek and had a long lunch there, letting our shoes and socks dry out in the sun. They got wet again later on a creek crossing, but by that time I was beyond caring. Watercolor told me later she had done the math and we did about 6,000 feet of elevation gain in all that day, spread over 19 miles, and that was just the gains. Sometimes the downhills are as hard as the uphill, my feet felt like rocks that had been stapled to my ankles by the end of the day.

As Watercolor and I tripped our way through the forest, catching ocasional views that I cared less and less about, I rambled to her about the pain cave I was in and my reasons for not quitting, no I was not seriously thinking of quitting, just thinking about what that would mean, ’cause that’s how I knew I wasn’t going to quit right?, because I could think about it but I wasn’t, oh God, oh God, just one foot in front of the other, and have you ever felt so detached from your own body that you feel how bad it hurts but the pain doesn’t belong to you?

When we finally arrived at our campsite, I pitched my tent and crawled into my sleeping bag, not even bothering with dinner.

We were camped right under Red Pass, the most difficult pass for a SOBO in terms of snow conditions, and I was relieved enough that the day was over to actually enjoy the view of the sun setting on Glacier Peak.

I hiked another 19 miles that day. Watercolor and I tackled Red and White Pass together. It was nowhere near as difficult as I had mentally prepared myself for, we took our time kicking our steps in the snow, but neither of us pulled out our ice axes (I not so affectionately refer to it as a Pack Ornament) or our crampons.

Our pride with our success didn’t last long, and we soon parted ways to endure the remainder of the section alone. The morning had been foggy, and I hoped the clouds would burn off around midday, but it stayed socked in. The day was a long slog through the car wash, no views, not even many big climbs, just rolling hills and fog. I knew I was burned out and needed a Zero day (as in zero miles hiked.) From where I wanted to camp that night, I would have to hike 22 miles the next day, but I could push through if a warm shower and a big meal was on the other side.

I came across the sign that signaled the end of Glacier Peak National Forest around midday, but I barely noted the achievement. I was feeling quite dejected when I got to camp, my fingers were numb, I couldn’t untie my shoelaces which were soaked and it took several minutes if focus to peel off my wet socks that had become a second skin. I got in my sleeping bag to get warm about 5:30. I was laying there, too cold to read, trying to warm up, and I remembered what my sister had written me in her parting note to me, to remember to celebrate my victories. I had cleared the toughest mountain pass and the toughest wilderness of the trail that day. I was too cold and tired to eat again, shivering in my sleeping bag, but I remembered to be proud of myself. Once I got myself warm enough, I even felt it a little bit.

An hour later Plugging Along showed up, I hadn’t seen him for a couple days. He had gotten lost coming over Red Pass but he made it, I was glad to see him. I went to sleep that night feeling content. It’s odd in hindsight, to remember how much I struggled every day. And yet every morning I woke up energized and excited, and every night I went to bed confident in my achievements. At some point I realized that suffering is not the same thing as unhappiness. Somehow the pain was still worth it. Somewhere in the haze that was Glacier Peak Wilderness, I realized my shoes were either at the end of their life cycle, or I just needed a shoe that had more support. I had done all my training in those shoes and they never bothered me, but hiking in them day after day, I couldn’t get past 15 miles without the soles of my feet feeling horribly sore. My shoes were well broken in and I knew this was beyond a normal level of pain. Watercolor had already dealt with overuse injuries in the California Desert before she flipped, she advised me that if you are having foot pain to sort out your shoe situation as soon as possible, or you might end up off trail a lot longer than you wanted to be. I would have to figure out getting to an REI when I arrived at Stevens Pass. Not only that but I snapped one of my trekking poles on day 12, I was cold, wet, and hungry. I sent my family a message on my GPS device, asking if someone could pick me up in Monroe if I caught a hitch down from Stevens Pass, only 50 miles away and very close to my parent’s house. I got a message back from Amanda, of course someone would come get me, just call when you make it out of the woods. 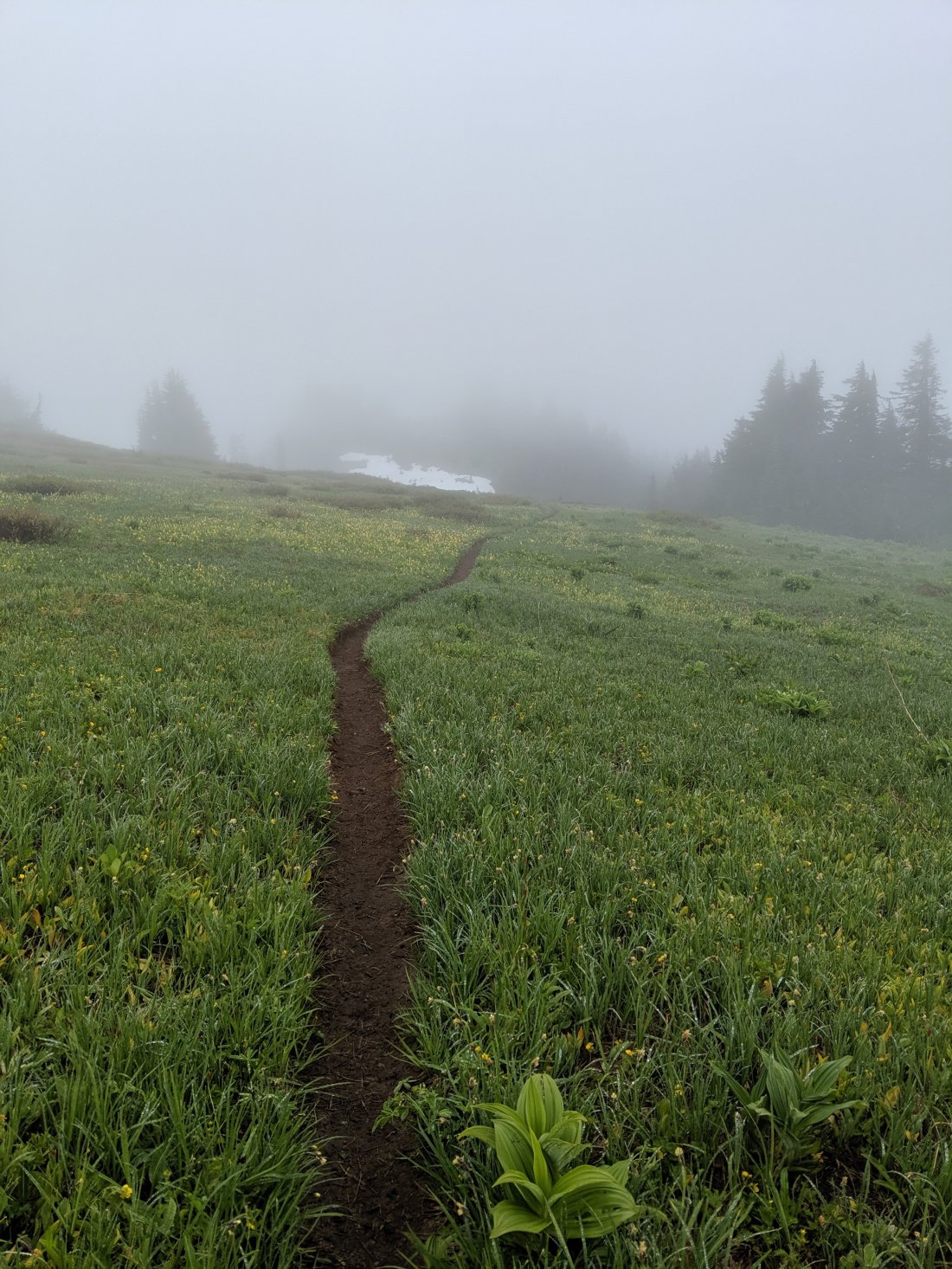 Before I got on trail I would have thought of it as weak to take refuge at home. That I was taking myself out of the experience, making things too easy on myself. But two weeks in the wilderness has done something to me, broken my ego a little. I felt nothing but gratitude that my family were so supportive, they lived so closeby to be able to help me, that they were proud of me even if I did come home for a day. I was no longer thinking about quitting, only how I was going to keep myself fit enough to continue on. I had tackled the hardest section of the trail, I made it out on the other side in one piece, and even in good spirits. Not even my own mind was going to stop me.

Those 22 miles felt like a breeze, I was passing through another physical barrier it felt like, emerging stronger on the other side. I had a lot of time to think that day, I listened to podcasts for the first time since Rainey Pass and it got some new ideas percolating through the fresh perspective I cultivated in Glacier Peak Wilderness. Somewhere around mile 17 that day I stopped where I was and typed out the following.

Before I came out here my coworkers had this conversation about the most recent spate of school shootings, and I found that I had opinions on the topic, as I do with most topics. I was going to get involved in the conversation, but then I stopped myself. I realized I was tired of having this discussion, tired of the moralism, tired of trying to solve all of society’s problems right in one go, and there are so many problems. That conversation is important to have, and I don’t fault anyone for doing so, but I felt so tired. During the course someone asked me what I thought about the topic and I shook my head because I didn’t know how to say what I was thinking. Finally I said “I think there’s a reason I want to go spend 5 months in the woods.” I’m tired of the system we have all been forced to take part in, the game we are all forced to play. I’m tired of having opinions, of the conversation that goes nowhere, of the sad stories, tired of all the problems that we cause ourselves because we live overly complicated lives and we don’t take care of each other. We don’t take care of ourselves. My answer was I’m done with all of this, I’m removing myself. Screw social media, screw the politics, entertainment and social isolation, the idolatry and wars, the hatred, the egoism, egotism, the whole swirling vortex of bullshit we have to endure every day. I am the definition of disenfranchised, I’m done with it. I want to go work my ass off at something that means NOTHING, that will make no difference in this whole mess we are in. My answer was to remove myself. Because I can’t do anything about it, no matter what my opinion is. So I’m just going to walk I guess.

I didn’t know why I was angry. But I knew I felt less angry than I had 5 days earlier. I had found a way to manifest my psychological pain, and it was cathartic.

I got a hitch at Stevens Pass when I finally made it off trail. My dad picked me up in Monroe and he still hugged me even though I stank worse than I ever have in my life. People were actually giving me a wide berth where I sat on the sidewalk in front of the Fred Meyer. But to me the city stank, all gas fumes and burned rubber. I watched the crowds of people bustling through the parking lot, living their lives, looking at their phones or searching for a parking spot, all going somewhere, all doing important things. It felt surreal. Only a day before I had been longing for the comforts of society, and now it all looked so strange, I already missed the trail, where I didn’t think about anything but my feet and my next meal.

View all posts by Erika Rae